Kamilah Aisha Moon has received fellowships to Vermont Studio Center, Rose O’Neill Literary House, Prague Summer Writing Institute, Hedgebrook and Cave Canem. Her work has been featured widely, including Harvard Review, Oxford American, and Prairie Schooner. Her poetry collection, She Has a Name (Four Way Books, 2013), was a finalist for the Lambda Literary Award and the Audre Lorde Award from the Publishing Triangle. A Pushcart Prize winner and a 2015 New American Poet presented by the Poetry Society of America, Moon has taught English and Creative Writing for many organizations and institutions, most recently as a Visiting Professor at Rutgers-Newark. Her next poetry collection is forthcoming in 2017 from Four Way Books.

Jeremy Michael Clark is from Louisville, Kentucky. His work has appeared or is forthcoming in Callaloo, Horsethief, Nashville Review, Prelude, The Rumpus, Washington Square Review, Vinyl, & elsewhere. He is both a Cave Canem & Callaloo Fellow, and has received scholarships from The Conversation Literary Festival, The Fine Arts Work Center, and Squaw Valley. Jeremy currently lives in New York, and is an MFA candidate & teaching assistant at Rutgers University-Newark.

Because the last pairing sold out completely, we now strongly recommend all interested audience members to buy an advance ticket (for a discount!). 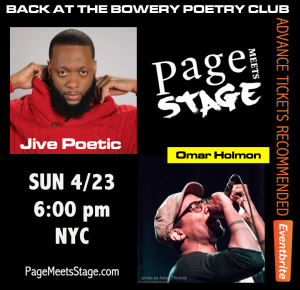 Jive Poetic received his BA in Media Studies from the State University of New York at Buffalo. He has performed his work in venues ranging from the Australian House of Parliament to the Tom Thumb Theater in Kent, England. He was also one of two poets selected by the US Embassy to represent American slam poetry during an international cultural exchange program in Warsaw, Poland. Jive Poetic has collected grand slam championship titles from Pensacola, Florida to Munich, Germany. In 2003, Jive Poetic was a member of the Nuyorican Poet’s Café’s National Slam team ranking second in the nation as a team, and 10th as an individual. In 2004, he was a member of the Providence Rhode Island Slam Team; in 2005 he was a member of the NYC Louder Arts Slam Team; in 2006 he was a member of the Brooklyn National Slam Team. In 2011 he served on the advisement panel at the Australian National Slam Summit. He was featured on season four of TVONE’s LEXUS VERSES AND FLOW. He is the co-founder of The SOUNDBITES POETRY FESTIVAL, the only performance poetry festival in New York City, and currently hosts the open slam at Nuyorican Poet’s Café. When he is not on tour or hosting, Jive Poetic teaches performance poetry and hip – hop workshops to at risk youth in New York City and surrounding tri-state area. Recently, Jive released his third poetry album, PERPENDICTIVE, and is currently an MFA candidate in The Pratt Institute’s creative writing and activism program.

Omar Holmon started out doing poetry just to see what he could get away with saying at upscale events. After 6 years he has represented New Jersey (Loserslam) and New York (Nuyorican & Urbana) at the National Poetry Slam. Omar has been on final stage at Nationals (placing second in 2014) and Rustbelt. He has also been on Ted X, Button Poetry, Verses and Flow, and even a commercial for Laphroaig whiskey. All of which is to say ya mans is nice and ain’t much else to prove. Omar can be found contributing essays on Black Nerd Problems, a website he co-founded with Will Evans. Meaning, whenever you see a nerd talking comics or cartoons, look in their fandom… you’ll see Omar.

This entry was posted in Next Pairing.